A visit to Jeir Station 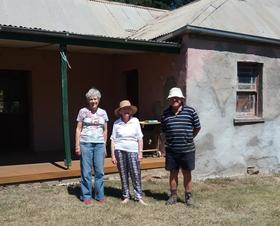 This coming October will see the launch of a display of Isla Patterson's watercolours depicting several of the region's old homesteads and homes. On Tuesday, 19th February, two of our volunteers, Judy Roberts and Mardie Troth, accompanied Isla to Jeir Station which will be one of the homesteads to be featured in the display.
Robert Johnson R.N. was the first landowner, being granted the land in the 1820s. After his death his son Robert Percy took over the holding and by 1890 Jeir Station provided homes, occupation, schooling and a place of worship for those who worked there, and a social focus for the district.
Kay and Colin Andrews are the current owners and they very kindly showed us around the original pise and rubble homestead dating to c. 1835.