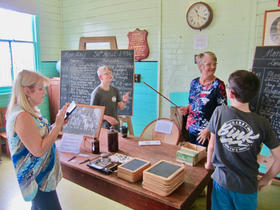 Jenny Butler (nee Bink) about to demonstrate use of the cane.

A hundred or so descendants of Reinhold and Anna Bink enjoyed a family reunion gathering at the Pavilion on 23rd March. Reinhold and Anna arrived in Australia in December 1950 with their five children. Reinhold established Bink Cement Products in 1960, from which a number of other businesses have subsequently been developed. Three more children were born after the family arrived in Australia - twins Peter and John, and sister Sylvia.

In 1957 the family came to live in Hall, at 'Avoca', on the corner of Hoskins and Victoria Street, and a number of the younger children attended Hall school - right across the road. The school visit was largely to show their children and grandchildren what their school was like. Twenty-five or so family members took the opportunity to visit the school.

Amongst them was Jenny Butler (nee Bink) who lives on the Gold Coast. Jenny has been a family respondent to a small social history research project documenting the large number of Dutch families who came to live in Hall - mostly briefly - in the fifties and sixties. So far documentation has been made of twenty families, and for many of them, including the Binks, photographs have been contributed.The Bink family moved into Canberra before the end of 1959, but seemed pleased to be back in Hall for their reunion this weekend.

Selected Spaces - the settling of Ginninderra »