Selected Spaces - the settling of Ginninderra 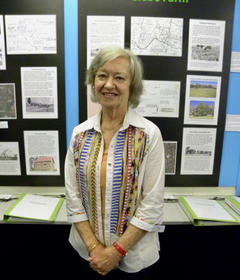 Around a hundred visitors packed the main exhibition room at the Centre on Sunday 14th for the official opening of 'Selected Spaces' by Dr Barbara Dawson.

''Selected Spaces is based on six 'case stories' of pioneering settler families in the broad Ginninderra district – the Shumacks of Springvale, the Kilbys and Camerons of Lands End, The Southwells of Parkwood, and of Brooklands, The Camerons and Gribbles of The Glebe, and the Hatches of Rosewood. It was very gratifying that many descendants of these pioneering families were present for the occasion.

It was a particular pleasure that we could welcome Marion and Helen Warman, grandchildren of William Hatch (Junior). Rosewood, the Hatch family homestead was little more than a mile from Hall when the village was proclaimed in 1882, and their land extended to the south along Halls Creek. The Warman sisters have donated and lent material over a number of years – most recently a biscuit barrel given to William Hatch and his wife by the Hall residents for their golden wedding anniversary in 1904 - which is displayed in the exhibition. Marion authored 'The Hatch Family in Australia', and one or two lucky visitors acquired copies from her on the day.

Barbara Dawson is a well-known local historian, currently a Visiting Fellow at the ANU. She authored a fascinating article for the Canberra History Journal in 2012 called 'Tracing the Weetangera Road' which helped to inspire the new exhibition.

The exhibition has made extensive use of early maps and plans to help tell the settlement story of the district that we now know as Belconnen. Four large scale maps from 1863, 1914, 1940 and 1971 paint the big picture of the district's development, while other maps detail the locations of the various homesteads and their relationships to the wider landscape.

'Selected Spaces' will be on display at least until October at the Centre's regular opening times.

Selected Spaces: The settling of Ginninderra