A Taste of Brass! 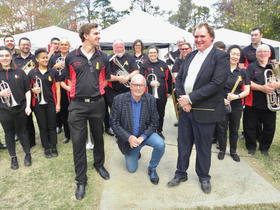 The 11th annual concert with Canberra Brass took place on Sunday 14th April and was enjoyed by a large crowd. Steadfast sponsors Barnett and Lilley again made the concert possible, and not only sponsored the Band, but helped with promotion, donated a raffle prize and presented a bouquet to the guest vocalist. Another stalwart, David Kilby, once again took on the MC duties in his inimitable style and bottomless reservoir of musical knowledge.

That guest vocalist role was taken this year by Pip Murphy, whose two fine numbers were performed with the Victoria Brass – Autumn leaves and Can't help Lovin Dat Man. Canberra Brass gave us the benefit of four numbers from the repertoire they will shortly take to the Yamaha National Band Championships in Brisbane – Fantasy Fanfare, overture Promenade, concert march Emblem of Unity and the hymn Nearer My God to Thee. The finale was our own special number – the Hall Village march, composed by Les Smith, a member of the band and a well-known musical identity in the band world. A copy of the music for this piece was given to the Hall School Museum and Heritage Centre at the 2018 concert.

This annual concert is a very important fund-raiser for the Centre. This year the raffle and bucket collection, refreshment stall and trading table yielded $1,1630 – a very welcome result. The Centre is very grateful to all those who have contributed, especially the local businesses that generously provided prizes for the raffle. These were:

The Preschool Parents Association was also on hand with their sausage sizzle, raising funds for the Preschool.

Many thanks to Canberra Brass, and every best wish for the Nationals in Brisbane! We look forward to seeing you back in 2020!

« Selected Spaces - the settling of Ginninderra