Visit by descendants of the Gribble and O'Brien families 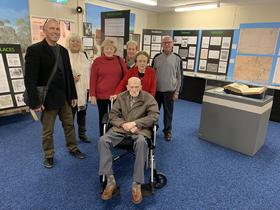 A group of descendants from the Gribble, O'Brien and Southwell families visited the Museum on Sunday to see the displays particularly relating to the Gribble history and Glebe Farm.
The most senior of the visitors was Ronald O'Brien who will be turning 100 in September and his sister Lorna May McIntyre aged 93. Lorna May is a mine of information on the early families and their lives. Ronald and Lorna are the children of Francis O'Brien and Evelyn (nee Gribble) who was the sister of Ernie Gribble who died tragically in the traction engine accident.
I have arranged to keep in contact with the other 'junior' members of the family to obtain photographs and stories and hope to do an oral history with Lorna.