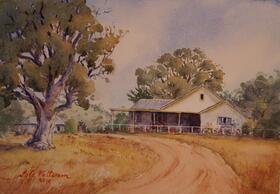 'Lochleigh' – built for Keith and Ruth Kilby on a soldier settlement block in 1928. Isla Patterson.

Canberra watercolour artist, Isla Patterson, has painted eight heritage buildings within the Parishes of Jeir, Wallaroo and Ginninderra which will be the centre piece of a new exhibition. This exhibition presents the paintings together with stories of how the land was acquired and the people who lived there.

We are delighted to be collaborating with Isla Patterson. The idea was born in September last year when Honorary Curator Alastair Crombie was invited to give a talk at the launch of an exhibition of Isla's paintings 'Hall and Beyond' - at the Kyeema Gallery, Capital Wines. Isla has painted extensively in the Hall district, including many early buildings. For this exhibition both old and new paintings have been selected, while the Centre's volunteers have researched their subject's historical contexts.

Non-Indigenous settlement of the Ginninderra district began in the 1820s, and proceeded at a rapid pace, after the explorer Throsby had followed the Molonglo River to reach the Limestone Plains. Productive land with a water source was highly sought after as the pioneer settlers advanced into the area, with squatters dominating land tenure. Legislation introduced in the 1860s facilitated the purchase of Crown land through generous 'hire-purchase' agreements. Paintings in the exhibition can all be located within this historical context.

The exhibition will be an unusual, but rather natural fusion of art and heritage. You are warmly invited to come to the opening, or come for a relaxed viewing later on.

See the event blog and interviews by Living Arts Canberra. There is also a fine article about the exhibition at the RiotAct

The public opening will be held on Sunday 6th October at 2pm, with the exhibition open until the end of the year.

« CWA gives us a donation