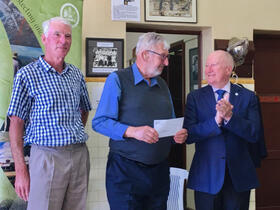 The Centre has won an ACT Heritage grant, announced by Heritage Minister Mick Gentleman at the award ceremony held yesterday at the Fire Brigade Museum at Forrest. The Centre had requested $7,500 to work in partnership with the Southwell Family Society to design and establish an Archive to consolidate and make more widely accessible documents, photographs and artefacts relating to the story of the Southwell family in Australia. Society President Ralph Southwell was on hand to receive the confirmation of our award from the Minister.

The ACT Heritage Grants program is a vital source of funding support for smaller groups and organisations such as ours, enabling us to take on projects that would otherwise be beyond our reach. This year the program is providing a total of $355,000 which will support twenty-one projects across sport, space, fashion, nature, emergency services, modern architecture and Aboriginal culture.

Also amongst the grant winners was the Canberra and District Historical Society, awarded a grant of $7,900 to stage an exhibition about the evolution and social importance of cricket on the Limestone Plains. As many will know, this project will be a partnership between the Society and the Centre, with the exhibition to be launched at Hall during the 2020 Heritage Festival. Allen Moore will co-curate the exhibition with Nick Swain, the Society's President.