See us at Cook! 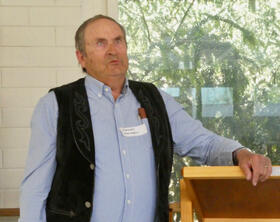 Kingsley Southwell holds forth on the Southwell's of Parkwood and Brooklands

Thanks to our growing cooperation with the Heraldry and Genealogy Society of Canberra (HAGSOC), our 'Selected Spaces' exhibition is now on display at their premises in the Cook Community Hub – the old Cook Primary school.

The display was launched last Sunday by Ginninderra MLA Tara Cheyne, whose speech revealed that she had some familiarity with the settlement story of 'Ginninderra'. The launch was the opening activity of HAGSOC's 55th anniversary celebrations, which included the award of prizes for a writing competition, and the recollections of some of the longest term members.

The Minister's speech was followed by short address from two of our pioneer descendants – Kingsley Southwell from 'Brooklands', and Helen Warman, a grand-daughter to William Hatch Junior, who was the last owner of 'Rosewood'. Their well informed and strong engagement with the stories they told kept the attention of a large audience.

Taking an exhibition 'on the road' is a bit of an experiment for the Centre. The physical task of mounting the display was made easy in this case by the large empty wall spaces available. Alastair Crombie and Tony Morris completed installation within two hours.

Our thanks to friends at HAGSOC for enabling locating our exhibition with them, and giving us a place in their 55th anniversary celebrations.