Back to 'Nine Elms' 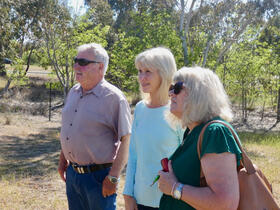 Many district resident will be familiar with the beguiling name 'Nine Elms'. The site of this old homestead is now on CSIRO land nearly opposite where Curran Drive joins the Barton Highway.
The original timber homestead was built by Edmund and Margaret Ward in 1877, and from here they ran the 'Ginninderra Nursery'. A Queanbeyan Age advertisement of the time declared:

"Ornament your homes by planting tress, shrub, vines. The undersigned is prepared to supply all kinds of fruit and ornamental trees at the following quotations, delivered at Ginninderra or at the Queanbeyan Age offices where orders may be left....".

Edmund and Margaret's daughter Millicent married George Harcourt, and lived for a while down the road a bit at Harcourt's 'Deasland'.

The Wards were followed at Nine Elms by Edward ('Ted') and Lucy Boreham [nee Cook], and it was a small group of Edward's descendants who visited the site today. There is little evidence of the nine elm trees that used to mark the track from the homestead to the highway, but extensive stone footings and piles of bricks and concrete blocks clearly delineated the old homestead, a tank stand, and a shed. It is hoped that somewhere in the family there will be a photo of the house, and that the visit will inspire more work on the Boreham family story.