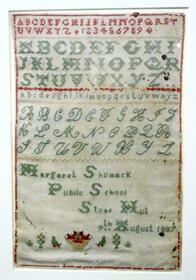 When Margaret Shumack began embroidering her needlework sampler in 1887, as an eleven year old student at the Stone Hut School, little did she know what would become of it. More than 130 years later the sampler has been listed as a nominated object to the ACT Heritage Register. This is a preliminary, threshold step and in the near future it will undergo further assessment by the Council to determine its suitability. We will eagerly await their final decision.

Meanwhile the Centre was successful in obtaining an ACT Heritage grant to have the sampler cleaned and conserved and the sampler will feature in a display at the Centre when the conservation work has been completed.

Margaret lived with her parents 'Big Pete' and Elizabeth (nee Williams) at 'Fern Hill' (present day Lyneham) and later with her brother Edward at the remaining family estate, 'Kia-Ora'. In the 1920s she and her sister ran a boarding house in Katoomba. She didn't marry and died in Braddon in 1945, aged 70.