Memories of a Hall lad 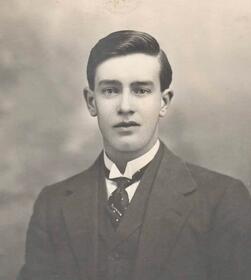 The Brown family has been an important part of the life of the village for well over a century. In particular, for the majority of that time the family has been involved in the ownership and management of Hall general store, initially in partnership with members of the Southwell family. A new publication by the Hall School Museum and Heritage Centre (HSMHC) tells of the earliest years of the Brown family in Hall, through the life and times of Claude Brown [1898-1990], a young lad growing up in the village.

The book –'My early Hall years' – is edited extracts of the memoirs of Claude and his wife Mabel. Claude was the great-grandson of the family patriarch 'Old Thomas Brown' who arrived from England in 1838 and settled near Dalton. Thomas was a champion of Methodism who devoted his life to preaching the word. Claude's father Ebenezer, a grandson of Thomas, married Elizabeth Southwell, one of five siblings who married into the Southwell family!

'My early Hall days' is the story of a young lad growing up in the small village of Hall, where his parents were partners in the general store, in the early years of the twentieth century. In a lucid, entertaining and informative style Claude tells us about his extended family, about the business of the shop, his delinquent adventures with other young lads (often involving explosions), long sulky trips to Dalton and Queanbeyan – and the first cars to appear, going to school at Ginninderra and Hall, his first job at the Cricketer's Arms, Sunday school at Wattle Park Methodist church, and more.

Brass on the Grass »