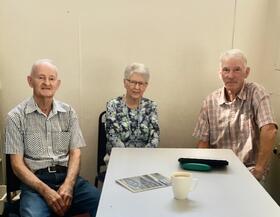 We were very pleased to welcome Ted and Kathy Moore to the Centre on Thursday 19th December, both from pioneer families. Ted is the son of Bruce Moore who made a name for himself as a historian, including a volume about the Moore family which was named after the original family home - The warm corner. In the third generation of the family in Australia, James Courtney Moore (1882-1962 - the son of William and Catherine) married Minnie Murty and moved away from the Moore family roots in the Burra - Cotter - Queanbeyan area, to Ginninderra. Here, it can be said, he began a Ginninderra branch of the family.

Ted has kindly given us some documentation about the Moores in Ireland, the family properties 'Green Hills' and 'Twelve Mile House' in the Bulgar Creek district (Stromlo area), and some press cuttings. While these subject areas are outside our area of prime interest - the Ginninderra Creek catchment - they concern the early years in Australia of a pioneer family whose members became well known in the Hall-Ginninderra district

Moore, B. 1981. The Warm Corner: a History of the Moore Family and Their Relatives, Early Pioneers of the Queanbeyan-Canberra District. Privately published: Pearce

« Fooling around in flannels