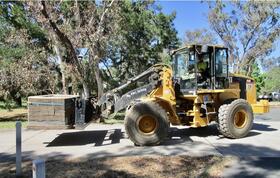 The Centre is now the proud owner of a historic tanning pit. On Monday 18 January some Palmer Street residents were puzzled to find a hefty low loader, two escort vehicles and a posse of workers loitering with intent. Fortunately it was innocent business. With the kind cooperation of Transport NSW and their contractors, the tanning pit was rescued from 'Dellwood', the cottage just over the NSW border which is being demolished to make way for duplication of the Barton Highway. The Dellwood tanning pit, we understand, is very unusual, being a rectangular, 'above-ground' structure made of concrete, similar to a large horse trough. Tanning pits were normally 'in-ground'.

'Dellwood' was built by George Harcourt in 1886 for bootmaker William Morris and his new wife (Louisa Gozzard). Bootmaking was a Morris family business; William's father Henry was a boot-maker. He had moved with his large family from Camden to Ginninderra village where they constructed a tanning pit and conducted a bootmaking business. Henry taught all his family the trade and continued his business in Ginninderra until his death.

Son William ('Billy') commenced his bootmaking business from his home, later building the Bootmaker's Shop in Victoria Street, Hall in 1907. His surgical boots were made to individual customer measurements and were of the highest quality, and he was recognised throughout the district. According to Leon Smith, 'as for material, make and fit, the Morris boots were practically unequalled, both for wear and water resistance'. [Smith, Memories of Hall]. Billy worked in his business until a few months before his death in 1941.

Billy tanned his own leather at 'Dellwood' and hand made boots for the district. He treated his bootmaking as an art, working long hours to make boots and shoes of the highest quality. He made shoes for the Crace and Campbell families. Son Harry would sell eggs and poultry on a Saturday and return with boots for repair.

The 'recovered' tanning pit is embossed with a capacity – 340 gallons – and a date – 1931. In 1931 'Billy' would have been 71, so it seems probable that the pit was built by, or for, his sons. Billy lived on until 1941, so could well have made use of it. Most pits were 'in ground', as was the Morris pit at Ginninderra, now filled in but with the ends marked by a Cypress Pine.

The above ground pit enabled easier lifting of wet hides from the tanning mixture of wattle bark (stripped from local acacias) water and salts. Many different hides were treated, including cow and bullock, kangaroo, goat, rabbit, fox, and possum (until protected).

On the occasion of Billy and Louisa's golden wedding anniversary the Queanbeyan Age reported : Mr Morris had conducted a bootmaking business at Hall for over 40 years. He is one of the few surviving tradesmen who can treat a skin or hide from the animal to the finished boot. He is well known in the district for the high standard of his work. He carried on his trade until a few months ago when he suffered a somewhat serious illness. He maintains he has made the largest pair of boots in the state – number sixteens. He specialized in riding boots and cripples' [sic] footwear for many years. [Queanbeyan Age 12.6.1936]

Billy's mother, Hannah, was extremely skilled in making leather products and passed her knowledge to the family. Possum and fox furs were sewn into bed rugs by the Morris daughters. They also hand stitched fur stoles and all family members were participants in the business. At the age of twelve Kathleen won a prize for the fine even stitching of a petticoat at the 1912 Ginninderra Farmers' Union Show.

Hall Countryside and Beyond »