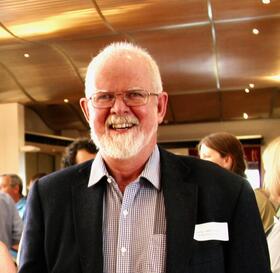 Congratulations are due to (Dr) Ken Heffernan, who has just been appointed Chair of the ACT Heritage Council. He has been Deputy Chair for the past three years. He was in fact one of the foundation members of the Council (1992-95) and has been a member in some capacity for nearly ten years in total.

For many of us he is known firstly, with his partner Jan Klaver, as a long-term resident of Hall, who has contributed in many ways to the life of the village community. Since his retirement from employment in 2014, Ken has been making an especially valuable contribution to the Hall School Museum and Heritage Centre. By sublime good fortune for the Centre, Ken offered his voluntary services just around the time that the Centre was asked to become the custodian of the lifetime Collection of Lyall Gillespie, Canberra historian and collector extraordinaire.

Shortly after taking up his role as a volunteer with the Centre Ken agreed to become curator of this Collection – a vital role given its size, diversity and importance. He has overseen cataloguing of the entire Collection, and the carrying out of a formal Significance Assessment project funded by a National Library of Australia grant. A follow-up Preservation Needs Analysis project is now underway. With some assistance from University of Canberra students Ken himself has catalogued the very large collection of Aboriginal stone artefacts, and curated the Centre's award winning exhibition 'Stones that speak'. He also curated a special selection of stone artefacts from Black Mountain peninsula for inclusion in the National Capital Exhibition at Regatta Point.

We take pride in the fact that both the President of the Canberra and District Historical Society – Allen Mawer – and now the Chair of the ACT Heritage Council are amongst our active members.

« Hall Countryside and Beyond