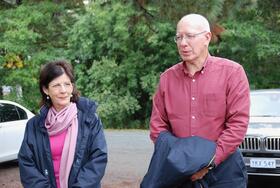 We were honoured on Sunday by a visit from their Excellencies the Governor General and Mrs Hurley. They were in Hall to attend and present trophies at the conclusion of the National Sheep Dog Trials, after a village stroll from the Centre to the Showground. A substantial gathering of volunteers and other friends of the Centre was on hand for the occasion.

After a short welcome from Honorary Curator Alastair Crombie our guests were offered short presentations on three of our present exhibitions by their curators – '10,000 years on Halls Creek' (Ken Heffernan), the ANZAC display, and latest exhibition 'Fooling around in flannels' (Allen Moore). Mrs Hurley took the opportunity to engage with a number of our volunteers – and to try operating the poison cart.

A highlight of their visit was the presentation to their Excellencies of a copy of Claude Brown's memoir, 'My early Hall days' by his great nephew, Scott Brown. His father Bevis and eight or nine other Brown family descendants were present for the occasion, and joined the visitors for a group photograph. This little ceremony highlighted the major purpose of the Centre, which is to discover and tell the stories of the families who settled the Ginninderra district (and of course the original Aboriginal custodians of the land).