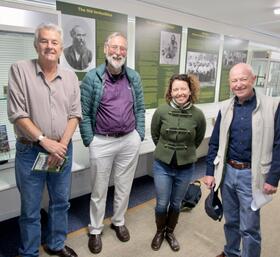 After extended delays due not to rain, but to COVID 19, 'Fooling around in Flannels' finally got an official launching the first week of the ACT and Region Heritage Festival.

David Headon, a history with well established credentials as a historian of sport (his story of the Canberra Raiders - 'Absolutely bleeding green' - has recently been released) gave a lively address in which he dwelt in particular on the contribution to cricket made by William Davis, the Squire of Ginninderra, and especially his support for Aboriginal crickets.

Minister Rebecca Vassarroti then offically launched the exhibition, revealing that although not a cricket tragic, she was thoroughly interested in the exhibition's attention to the women's game, and in particular the part played by the YWCA - an organisation that she once worked for. While at the Centre she also spent time viewing the new Ginninderra blacksmith display, the refreshed display on early Indigenous life on Halls Creek, and the old Hall school.

As usual many of our volunteers played a part in making the day a success, and had their reward in seeing a high level of interest in the development of cricket on the Limestone Plains, and our many other displays.