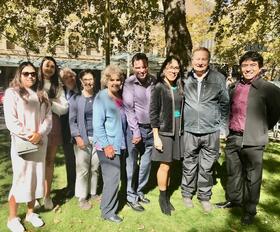 Son Neil (second from right) and other Gillespie family members.

We are delighted to report that Lyall Gillespie's name has been added to ACT Honour Walk in Ainslie Place, Civic. The ACT Honour Walk recognises individuals or groups from across all categories of endeavour that have made significant and sustained past contributions to the ACT. The award aims to recognise the immense contribution made by those who have helped to shape the city of Canberra as we know it today.

A large group of Gillespie family members were amongst a large crowd attending the ceremony. Alastair Crombie and Ken Heffernan, who worked on the nomination with Lyall's son Neil, represented the Centre. The citation for Lyall reads:

'Lyall L. Gillespie ISO OAM (1919-2006) brought Canberra's early history to life through his historic writing on pioneers, Indigenous people and early education in Canberra and its region. He was also a dedicated contributor to the sound administration and development of Canberra. His 45 years of public service was recognised with an Imperial Service Medal in 1982.

Lyall gifted his community an understanding and appreciation of its history, based on a commitment to archival research and a willingness to volunteer his time to write many news and journal articles, as well as books, on Canberra's history. Lyall's historic works continue to enrich the life of residents and visitors by helping them to appreciate what an interesting place Canberra is. He was awarded a Medal of the Order of Australia (OAM) in 1998 and was elected a fellow of the Federation of Australian Historical Societies in 1999.

Lyall developed and curated his collection of historic records and artefacts so meticulously that it could later become a community resource. In 2015 his family donated his collection to the Hall School Museum and Heritage Centre where it is available for public education'.

It was a good to be reminded again of the extraordinary contribution that Lyall made to the understanding of the history and heritage of the Canberra district, a contribution that is embodied in the Gillespie Collection that we are now custodians of.