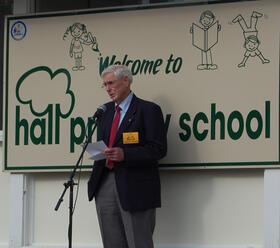 John Thompson at the launch of the Centenary of the opening of Hall School.

John Thompson, who passed away on 1 June, was a long time 'Friend' of the Hall School Museum. John was the grandson of the first Hall Public School Teacher Charles Thompson.

John provided the museum with a wealth of material concerning his grandfather, his time as a teacher and all the community connections he had with Hall Village. The material included artefacts, documents and photographs which the Museum was able to display at various exhibitions.

John and his wife Judy visited the museum on a number of occasions and spoke at the launch of the Centenary of the opening of Hall School in 1911.

The team at the Hall School Museum send their deep condolences to Judy and the rest of John's family during this sad time.