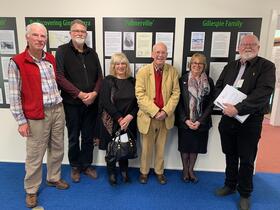 The gods were smiling on our tenth anniversary annual meeting and celebratory lunch on Thursday 12th August. Dr Roslyn Russell, our distinguished guest speaker, finally got to deliver the address she had been contemplating for two years. In 2020 COVID shut us down, while in 2019, Ros badly broke her wrist. This year, within a few hours of giving her address - 'Historian - Collector - Museum: Lyall Gillespie and Hall School Museum' - the ACT was locked down!

We had chosen Ros in 2019 to undertake a Significance Assessment of the Gillespie Collection, and were delighted to have her readable, informative and authoritative report. Her task was helped by having known and worked with Lyall in the eighties, assisting him with two of his best known books.In her address she recapped Lyall's career, shared her views on his extraordinary collection, and offered some reflections on our Centre. Her presentation was followed by a fine lunch.

Several long-standing friends of the Centre joined us for the occasion. Dr Malcolm Beazley gave an address at the inaugural meeting of the Friends of the Hall School Museum (as it then was). His team from the Australian National Museum of Educational the University of Canberra had conducted an invaluable inventory of the School Museum collection in 2008, and Malcolm has been a staunch member of the Friends from the beginning.

So too has Elizabeth Burness, known to many for her long association with Tuggeranong Schoolhouse. She began her association with the Hall School Museum before the school was closed in 2006, and after it closed became an unofficial curator, opening the building monthly on Hall market days and hosting visiting groups. She left us to become the trustee of Tuggeranong schoolhouse, but has remained an interested supporter.

Kim Morris also played a vital part in getting the Hall School Museum launched. In 2010 we were awarded an ACT Heritage grant to undertake a Conservation Management Plan, for which we contracted Kim. His report was another critical milestone - and a very good learning experience for us. We very soon had Kim back again, to deliver a series of basic conservation workshops, so that we were capable of addressing some of the issues that his report had identified.

Earlier, the Centre held its annual meeting, when Honorary Curator and Treasurer Margaret Foley presented their reports, and the existing managing group - Mardie Troth, Paul Howarth and Alastair Crombie - were endorsed to continue.