Brass of the Grass 14 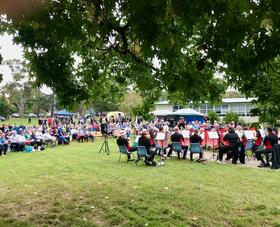 Canberra Brass under the baton of Adam Powers

Our 14th annual Brass on the Grass concert spread its wings this year, including the Queanbeyan Junior Brass, the male a cappella choir Canberra Chordsmen. Despite a threatening morning, the weather held fine - though no-one got sun burnt!

The Queanbeyan Juniors, though depleted by COVID gave us an excellent start to the proceedings, showing what they could do in a pre-concert 'warm up' followed by a few numbers when the concert got underway.

Canberra Brass also had to work around some COVID absences, including Band Director Veronica Boulton. Victoria Street Brass conductor Adam Powers took on her duties on top of his own, for a very busy afternoon. A bouquet for Veronica was entrusted to the band. Canberra Brass has a film music theme for their items - including Batman, Jaws, Live and Let Die, and a Star Wars medley.

For the first time, the concert included a choir, the male a cappella group Canberra Chordsmen. The Chordsmen perform 'barber shop' style numbers, and their top quality performance included a number of well-loved popular songs.

Honorary Curator Alastair Crombie had the task of thanking two stalwarts of the annual concert. David Kilby was presented with a well-established snow gum, and thanked for his distinctive contribution as MC of the concert over many years. David and Jenny again contributed a stay at their four star B&B establishment, Last Stop Ambleside Brook to the raffle.

Stephen Barnett and Scott Lilley of Barnett Lilley and Asssociates were recognised and thanked for their decade of staunch support for the event as sponsor. We could hardly have asked more of them than the unstinting, thoughtful and generous support they have given us. Alastair noted that this year's concert was sponsored by the new owners of 'B&L', Parker Financial Services, and we will be discussing with them their interest in continuing involvement. They were given copies of 'My early Hall years', the memoir of Claude Southwell, including his childhood growing up in Hall with the family who ran the store.

Hall businesses and other friends of the museum contributed an amazing seventeen prizes to the raffle, which included hampers, cases of wine, and two nights B&B. The raffle accounted for over half of the $1,976.80 total was raised, the rest coming from our refreshment stall and a bucket collection. We extend our gratitude to all those who contributed towards this excellent result.

Finally, we had never seen the school grounds looking so well manicured. A little rain has helped keep it green of course - but also turbo-charged growth. Warm thanks are due to Darrel Minion and Denis Greenwood (and maybe other unknown?!) for getting the venue into such fine condition.

Our warmest thanks to all those local businesses who generously donated donated prizes for the raffle: