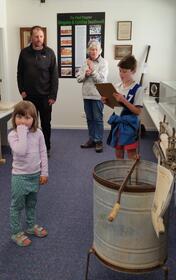 As part of this year's ACT Heritage Festival program of events organisations were encouraged to develop and host activities especially designed for young people. This year's theme was CURIOSITY and we decided to participate by offering a Curio Treasure Hunt on Wednesday 20th April.

Despite early morning inclement weather we had a good role up of kids and parents/carers who meandered around the Centre looking for artefacts from our collection that matched a series of clues given to them. I have to say some of the children were 'sharper' than their parents and all who participated finished the hunt with close to 100% outcomes.

We have decided to keep using the idea on Sundays when families visit, and offer the treasure hunt clues to children while their parents soak up the information and exhibits on display at the Centre.