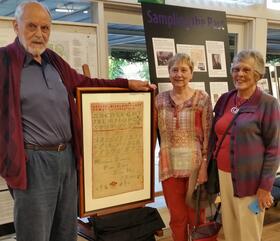 The Lyneham Community Association hosted a heritage walk on Sunday 24th around North Lyneham as part of the 2022 Heritage Festival. Much of the area covered was once owned by 'Big Pete' Shumack who in the 1860s, aged in his early twenties, began acquiring land. He and his family lived at 'Fern Hill', with their homestead located near modern-day Mackennal & Archibald Streets Lyneham.

His daughter Margaret attended the local Stone Hut School which later became the Gunghaleen School and it was during her time there that she, as an 11 year old student, made a wonderful cross-stitch 'sampler'. School girl samplers are embroidered textiles closely associated with needlework artistry and early colonial history. Her sampler has survived and is now 133 years old.

Sandra Whichelo, a Shumack family member, donated the sampler to the Centre some years ago and following an ACT Heritage Grant the needlework has been conserved and is now able to be publicly displayed. Following the heritage walk the sampler, and family history information about the Shumacks and other pioneering families, was on display at St Nininan's Church Hall in Lyneham.