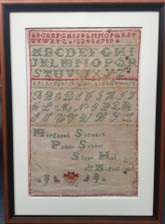 On 6th June the Centre received formal acknowledgement from the ACT Heritage Council that one of our prized artefacts, the Shumack - Stone Hut School Sampler, had been registered as an item of significance and added to the ACT Heritage Register.

The Heritage Council described it as 'an embroidered textile sampler dating to 1887. It was created by Margaret Shumack while a student at the Stone Hut School. The embroidery is stitched in woollen thread on a plain weave linen ground fabric. At the top of the sampler there are four variations of alphabets. The uppermost alphabet, along with the numbers 1-9, are stitched in red thread, with the remaining three alphabets stitched in green thread under this. Below the alphabets, there is wording embroidered in green thread, which reads:

At the bottom of the sampler are images of birds, trees and a basket embroidered in green, red and yellow thread. The whole is surrounded by a stitched border and several dividing lines composed of different patterns and stitching types'.

'The Shumack Stone Hut Sampler is an example of a 19th century sampler made at a location now situated within the ACT. The inclusion of the alphabet and numerals are characteristic of marking samplers made by young girls during their educational studies. In this case, the alphabets have been stitched four times in different styles. The name of the maker, school and date are all included as part of the design this linking this object to a specific person, time and place. School samplers, which were only required to be made by girls, are representative of the socio-cultural importance of needlework in the lives of women and girls in 19th century colonial NSW.'

« Entrance foyer gets a lift!