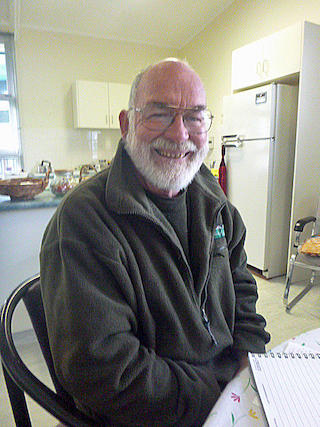 The great grandson of William Morris the original Hall bootmaker.

Tony is the son of Rex & Hazel Morris (nee Southwell) and grew up in Limestone Ave, Braddon.

Bootmaking has been a family trade for over 100 years.Tony's great great grandfather Henry opened a bootmaker's business in Ginninderra in the mid 1800s. Henry's son William continued the bootmaking business in Hall Village and added banking, bicycle repairs and barbering to the services he provided. William's wife was also an accomplished surgical boot maker. William's son Harry Morris was also a bootmaker and moved the business to Civic in Canberra's centre. Tony's father Rex was also a bootmaker but also started a successful taxi business where a lot of his clients were federal politicians.

Tony went to Ainslie Primary School and Telopea Park High School.His first job was as a public servant in the Department of Treasury and then as a Survey Draughtsman and other work with the ACT Administration.

Tony married Margaret McDonald in 1965 and they have 2 children Heather and Craig.

His final job was as the Manager of Bruce Stadium. Tony retired from full time work in 1997 and then was able to continue his work with the Hall community on a full time basis. Tony and Margaret have been heavily involved in a variety of community activities for many years. Hall Rural Youth, Hall Progress Association, Hall School Museum, Hall Markets, the Canberra Show, Hall Men's Shed are just some of the activities that they have been associated with.