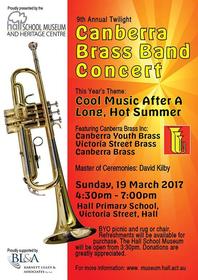 Thanks to all who contributed to the Ninth Annual Twilight Concert! The event has enabled to museum to raise a little over $1,000 - a great result! An audiences estimated at 250 - 300 heard three bands performing - Victoria Street Brass, Canberra Youth Brass and Canberra Brass - with a massed band finale. Thanks to Viv Martin (Band Director) and Adam Powers, and all the musicians. For the first time the program included a male soloist - Dominic Neil - who performed 'Mack the Knife' and 'New York, New York' to a very warm reception.

The twilight concert - a staple of the autumn in Hall - was again sponsored by Barnett Lilley and Associates; David Kilby acted as MC. Hall Preschool put on a sausage sizzle, while museum volunteers sold tea and cakes and put out a market stall, sold raffle tickets and organised a bucket collection. It never rains when it is concert time, but it tried pretty hard this year..........

The senior band - Canberra Brass heads to Launceston for the Australian National Band Championships at Easter - we wish them every success. Later in the year they will be playing at the prestigious European Brass and wind band festival in Germany. We greatly value their annual concert at Hall and look forward to many more!