'Painting with Parkinsons' – the Hall connection' 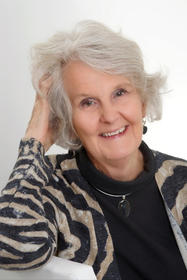 Many readers will well remember long term village residents the Tingey family: In his 40s, Bob developed Parkinson's disease, so had to retire early from his work as a geologist (he died in November 2017 aged 77). Over the years, his wife Nancy became his full-time carer, as well as keeping up her own creative interests as an artist.

Combining caring and her passion for art as therapy, Nancy set up the Painting with Parkinsons group which still continues today at the Botanic Gardens nearly 25 years on. To celebrate this milestone, for the last 3 years, and drawing on thorough documentation over a much longer period, Nancy has been busy compiling a book to record this journey: 'Magic Happens' is now completed and launched. It is a beautiful presentation, full of the colour and spirit of the participants' artworks, as well as their personal stories and how significant a role the painting group played in their lives: providing great social and emotional support; relaxation which eased symptoms, and a 'can-do' approach to life, combatting the tendency of this disease to steal abilities and any associated sense of achievement or agency.

The book is a very detailed account of the blood, sweat and tears, and occasional joy, that went into establishing the painting program, and evolving it into a much more comprehensive offering – bringing in music, poetry, clay, yoga and more, to trigger creative ability. A Churchill Fellowship saw Nancy travelling overseas to share ideas with like-minded individuals and groups. Ensuring reliable financing and other resources was, and is, a constant headache. All who helped are acknowledged and thanked.

Slowly, recognition of the value and benefits of the Painting with Parkinsons program have become recognised and are being replicated both in Australia and internationally. In 2019, Nancy is taking the book to the Book Nook at the World Parkinson Congress conference in Kyoto.
Congratulations Nancy!

Details of the 'Painting for Parkinsons' program, and of Nancy's book 'Magic Happens' - including how to buy a copy - can be found here

The Tingeys time in Hall (from Nancy)

I had been in Australia for two days when I saw the house on the corner of Hoskins and Hall Streets, Hall, in September 1971. The real estate agent, who seemed to be related to half the village, had been stunned when I said I wasn't interested in buying a house in a new suburb as an investment but would like a wooden house with a tin roof about ten miles out of Canberra City. He said, 'I think you are crazy but i have to sell my uncle's house in Hall and it fits your description exactly'. Bob and I lived there for 28 happy years.

We raised our three sons, Alex Sam and John there and all went to Hall Pre-School and Primary School. As a result I was Pre-School President for the year when we developed the Hall logo and made community quilts for retiring preschool teachers Pam Peppercorn and Polly Plowman - the 'Sweet Peas'! Over the years I ran a few art and craft classes in the Primary School as a volunteer and Bob became Chairman of the Hall Primary School Board.

Outside school Bob was secretary of the Progress Association for a few years, notably leading the 1970s fight to prevent the Hall Creek development of 2000 houses using Loftus Street as the main access road. Bob door-knocked every home in the village to explain what was planned. A few years later I became concerned about the proposed demolition of historic buildings in Hall. I remember one day Marjorie Crombie appeared in the garden with a Heritage Commission form. I filled it in and sent it off and got nowhere. However with Margo Haysom and the help of the Canberra Historical Society I formed the Hall Historical Society to raise awareness about the unique qualities of Hall Village, duly losing the fight to save buildings left right and centre!

However we did manage to have the Hall Conservation plan drawn up which 30 years later had some influence in preserving Hall as an entity in its own right, separate from the spreading Canberra suburbs. I also managed to persuade the National Library to make oral history recordings of Jean Southwell and jim Rochford about the time they each turned 80.

Around 1984 I curated the Young Peoples Art Show in the Hall Pavilion and a few years later helped organise the Hall Historical Art Show.

As Bob's Parkinson's symptoms developed, after 1987, we become less active in local community activities. But my work developing Painting with Parkinsons was recognised by members of Hall Rotary, to whom I am eternally grateful. Rotary club member Jim Rochford mounted all our art work, sometimes over a hundred pieces a year, for the cost of the materials only, between 1995 and 1999, and in May 1999 the Rotary Club of Hall awarded me their Vocational Excellence Award.