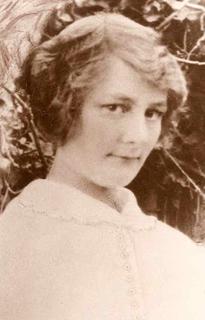 Vera Kathleen Curran was born in 1893 at Ginninderra, the eldest child and only daughter of Harry and Agnes Curran (nee Gribble). At the time of her birth, her father was the blacksmith at Ginninderra and the family resided in a house beside the forge.

On leaving school, Vera trained as a nurse at Crown Street Women's Hospital in Sydney. Afterwards she returned to the district and worked occasionally at Queanbeyan Hospital.

Vera met her husband, William Carney ('Bill') when he was working at Gunghaleen Station. But their romance was interrupted by the outbreak of the war, though they continued to correspond throughout the war years and Bill carried a photograph of her in the pocket of his uniform.

After the war, Bill married Vera at St Gregory's in Queanbeyan and they set up home at Gladesville, near where Bill worked at the hospital. They had three children here (Mauva, William, and Kathleen). Sadly, William died shortly after his birth. The family returned to Ginninderra in 1927, when Bill took up a soldier-settler property at 'Charnwood'. At Yass, their last child, Estelle, was born.

With many friends and family members in the Ginninderra district, Vera and Bill and their daughters quickly settled into the community. Bill cleared the land and built a house. Vera was well known as an excellent cook and baked for many of the community events. They also participated in sporting activities in the village, particularly tennis and cricket. Vera was captain of the local women's cricket team.

In 1934 toddler Estelle was bitten by a brown snake when playing outside their home. Fortunately, her mother's nursing skills came to the fore and first aid was quickly administered by lancing Estelle's finger with a razor. After a night in the Canberra Hospital for observation, she was discharged without any ill effects.

Bill and Vera were stalwarts of the Hall community and were highly regarded by all who knew them; Vera as a kind and gentle person, always ready to help anyone in need.

Sadly, in 1938 Vera contracted pneumonia and died at the age of 45.