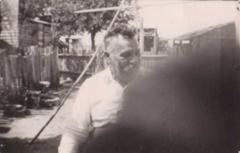 Noor Mohamad (also known as 'Charlie Noor Box') was born in the Punjab in c.1873 and came to Australia as a youth. Little else is known about the origins of one of the most colourful characters of the district and a regular visitor to Ginninderra in the early 1900s with his hawker's cart.

Charlie was one of the so-called 'Syrian Hawkers' who serviced the isolated homesteads of the community with his wares (haberdashery, kitchenware, tools, confectionary, etc.).

Mulholland, in Far Away Days: A History of the Murrumbateman, Jeir and Nanima Districts writes:

Charlie was a very welcome visitor in this district and enjoyed the respect of those who knew him. He was known for his kindness towards his fellow man, helping in time of sickness when people could not pay for the doctor to come from Yass.

Mohamad started off selling wares on foot: walking the long distances from homestead to homestead with his goods bundled up in a haversack. He later purchased a horse and cart.

In 1910 he had earned enough to settle down at Sutton, where he re-opened the general store and married Edith Butt. Noor and Edith raised a large family of eight children together.