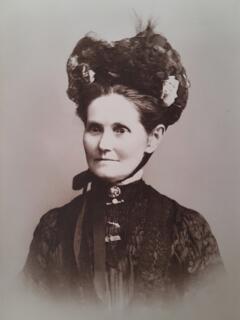 Gold Creek
The Rolfes of 'Gold Creek' Anthony and Catherine Rolfe and their five children emigrated to...

Tea Gardens
Catherine (nee Curtis) and Anthony Rolfe emigrated to Australia in February 1849 on the Harbinger...

Death reported of an old and esteemed resident of Ginninderra, Mrs Ryan wife of Mr John Ryan of Tea Gardens, which sad event took place at her husband's residence about 1 o'clock January 28th. The deceased lady who was something over 70 years of age contracted a virulent attack of pneumonia the result of a chill a day or two after the burial of her granddaughter, who just a short fortnight ago succumbed to the same complaint. Although Dr Blackall of Queanbeyan and a trained nurse from Sydney were in almost constant attendance all their efforts to preserve her life were unavailing.

The deceased was a sister of Mr Edmund Rolfe of Gold Creek, Mrs W Weir of Queanbeyan and Mr G Rolfe innkeeper of Cooma. Besides her husband deceased leaves a grown up family of six grown up sons and daughters. Two of the daughters being married, one to Mr Jas Sullivan and the other to Mr Jas Moran of Queanbeyan>.