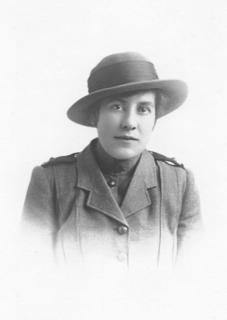 Parkwood
The Parkwood Home of Thomas and Mary Southwell Southwell Family Society In 1863 at the age...

Gladys Elizabeth Clare Boon served in the Australian Army Nursing Service (AANS) at Salonika, Greece from 1917 to 1919 and then briefly in England before returning to Australia. Trained at Orange Hospital, she nursed at Bathurst District Hospital and Wallsend Hospital before her marriage to Arthur Firkin in 1925.

Gladys Elizabeth Clare Boon was born at Queanbeyan, NSW on 19 February 1891 to David William Boon, a policeman, and his wife Elizabeth (nee Southwell). Gladys's mother Elizabeth was a daughter of Thomas Southwell, a pioneer settler at 'Parkwood', a property on Ginninderra Creek, in New South Wales. After Elizabeth Southwell married David William Boon at Parkwood Chapel they lived near 'Parkwood' until David Boon joined the mounted police and was posted to a succession of New South Wales country towns. Gladys's connection to Canberra is through her descent from the pioneer Southwell family.

Gladys Boon trained as a nurse at Orange Hospital graduating with a four-year nursing certificate in February 1915. She continued nursing at Orange Hospital until December 1916 when she resigned as head nurse to nurse at a military hospital, 4th Australian General Hospital (AGH) at Randwick in Sydney. On 3 April 1917 Gladys enlisted in the Australian Army Nursing Service in Sydney. Her enlistment papers describe her as aged 26, her religion as Methodist and her next of kin as her father David Boon of Orange. She gave her birthplace as Goulburn but NSW birth records state she was born at Queanbeyan.

She was recruited following a request from the British Government for Australian trained nurses to staff four British military hospitals in Salonika in northern Greece. In response to the request three units, each of 91 nurses, embarked from Australia in June 1917 and a fourth unit in August. The first three units began duty in Salonika in August 1917. The fourth was delayed in Egypt and reached Salonika later. Altogether 42 Australian sisters and 257 staff nurses served in Salonika.

British and French forces had arrived in Greece in 1915 to fight Bulgarian forces invading Serbia, to regain control of the Balkans and prevent enemy forces taking areas leading to the Suez Canal and the Middle East but they saw only intermittent action over the next three years. Most patients at the military hospitals were British soldiers and Bulgarian prisoners of war. Many were not battle casualties but suffering from diseases including malaria, dysentery and black water fever. Australian nurses preferred to serve in Australian-run hospitals and to nurse Australian soldiers. This was never the case in Salonika. In addition they felt they had been relegated to the war's sidelines. Any action in Greece was little reported at the time. The final battle against the Bulgarians in September 1918 was not reported in the London Times in any detail until 1919.

All the nurses in Salonika felt the bitter cold and snow in winter and the intense heat in summer in hospitals that were accommodated in tents or primitive huts often in swampy areas which became quagmires after rain. In winter there was not enough fuel for braziers to heat the tents and by morning the blankets on patients were stiff with ice. In summer mosquitoes were a serious problem. Most nurses had bouts of malaria which was endemic and those who suffered recurrent malaria had to repatriated to Australia. Two nurses died in Salonika and, by August 1918, 46 nurses had been invalided back to Australia. Nurses wore heavy mosquito nets and clothing covering every part of their bodies in an effort to ward off mosquitoes but they sometimes discarded extra coverings that made nursing impossible.

Three months after enlisting Gladys Boon travelled with one of the first groups on RMS Mooltan to Suez and then on to Salonika arriving on 25 July 1917. After short postings to the 60th British General Hospital (BGH) at Hortiach and 52 BGH, she was assigned to 50 BGH, a hut hospital at Kalamaria on the outskirts of Salonika. She remained there for most of her service in Salonika apart from being hospitalised in August 1918 with debility and again the following month with influenza. She was still nursing in Salonika in January 1919 when she was sent to England to nurse at the 3rd Australian Auxiliary Hospital at Dartford where war nerves and neurosis cases were treated. This was her first experience nursing Australian soldiers.

At the end of April 1919 Gladys was given three months' leave with pay to attend a course in Domestic Economy at the Battersea Polytechnic, London. This scheme was available to members of the AIF and the AANS to enable them to undertake suitable courses in England to assist them to return to civilian life.

Gladys's course was cut short when her leave was cancelled preparatory to returning to Australia. She received a certificate in domestic economy which included cookery, laundry and domestic work, her record stating that she had shown 'great interest in all subjects' and the 'standard of her work had been very good'. She embarked for Australia on SS Zealandia on 3 July 1919 and was discharged in Sydney. When Gladys Boon returned to Orange late in August 1919 the Orange Leader reported that she looked 'remarkably well'. The Model Band played as the train pulled into the station and the Mayor and a representative of returned soldiers welcomed her home, as well as a crowd of relatives and friends.

During 1920 Gladys Boon nursed at Bathurst District Hospital but resigned early in January 1921. She later nursed at Wallsend Hospital and on 29 July 1925 married Arthur Lawry Firkin of Wallsend at the Methodist Church, Orange. A resident of Wallsend, Gladys Firkin died suddenly at Manly, New South Wales on 25 November 1948.

She was awarded the British War Medal and the Victory Medal and is listed on the ACT Memorial and on the Orange Methodist Church Honour Roll.