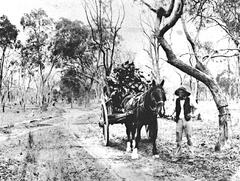 Jacob Blundell was the eighth child of twelve born to Joseph Blundell [1798-1874] and Susan Osborne [1814-1892], both born in Kent, England [Alan Hawke (2019) gives a meticulous and absorbing account of their backgrounds, journeys to Australia and establishment of their family] . Jacob, one of their four boys, was born at 'Canbury' NSW in 1853, and became known later in life as 'Jakey'. In 1876 at the age of twenty-three he married Lucy, the daughter of Peter Plummer and Ann Beare from Burra, with whom he subsequently had twelve children. The birthplace for all but the two first children – twins Joseph and Richard, born in 1877 – is recorded as 'Wallaroo'; the twin's birthplace is recorded as Oaks Estate. Their children were:

On 15th March 1883 Jacob was able to conditionally purchase 140 acres in the Wallaroo district (Portion 126, Parish of Wallaroo), where his immediate neighbours included the families of James Rolfe ('Bedulluck'), Alex Rochford ('Forest View'), Patrick Coulton and Alex Boyd. His selection was called 'Willow Farm'. The Johnston family's extensive Jeir Station was not far to the north.

The evidence suggests that he and Lucy did not actually set up home at 'Willow Farm' until 1887 or later. This is supported for example by a memoir of their son Richard ('Dick'), who recalled (in 1960) that, when aged five, he attended Springbank school at Acton in 1882...:

"Had a few years schooling and we left and took up selection 140 acres known as Wallaroo in the year of 1887. I and my twin brother [Joseph] had to go to work cutting down trees, fencing and clearing the land to put in a crop. We grew all our own patatoes (and) vegitables and had some very good wheat crops. I can remember father getting 8 shillings a Bushel, and that was while the big gold rush was on where Young is now and Temora. We had a few bad years and had a job to get enough food, but with a few fowl two or three old cows and sheep and pigs we pulled through".

He was then sent to work for Charles Hall at 'Yeumberra' for two years, after which he:

"..came home to help on farm done a lot of contract work on Jeir Station with my father pulling down trees and clearing the land with a Forest Devel [sic – should be 'Devil'] machine ('a device to pull down a tree by mechanical advantage, sometimes with a winch, as a method of clearing trees from land'), also done a lot of fencing contracting for different people in the district". [unpublished manuscript on the Blundell family (2019) Allan Hawke)

Later, in 1908, Jacob acquired an additional adjacent 23 acres 'at the upset price of 1 pound per acre', being the balance of the 30 acre block on which Glenwood school was built in 1883 ('a slab building (20ft by 13ft) with a shingle roof, unlined and built with community help'....).. Yemen's Dictionary of the Landowners NSW 1900 records Jacob Blundell, 'Willow Farm' as growing wheat and oats.

Jacob and Lucy's children were a significant part of the Glenwood school enrolment over many years. They had a very short walk to get there! Arthur, Alice and 'Lottie' (Charlotte) are identified in school photos; three other Blundell children are identified only by surname. Tragically, a serious outbreak of diptheria claimed the lives of two of Jacob and Lucy's children in 1886 – Margaret (6) and Caroline (4) – along with two young McPherson children. In his account of the Rochford family of 'Forest View', Rochford records that Jacob and Lucy returned from the first doleful journey to St Johns only to find they had to make the journey again. [Rochford (1982) p.32] (Margaret and Caroline share the Blundell family plot at St John the Baptists with their grandparents Joseph and Susan, their uncle Abraham [1847-1884] and aunt Mary Jane [1855-1873]. Arthur went missing in 1906:

On Saturday evening Arthur Blundell, the son of Mr. J. Blundell, Glenwood, went out to set rabbit traps, and as he did not return at the usual time his parents became alarmed and set out to search for the missing boy. His traps were set and his tomahawks found sticking in the ground near the last trap. A diligent search was made during the night but no trace of the boy could be found. The matter was reported to the police on Sunday morning, and a large number of neighbours and friends went out to seek the lad, but your correspondent has not yet learned with what success[The Queanbeyan Leader, 1 March 1907 - Page 2]

Lucy Blundell passed away in 1924 at the age of 68. Jacob survived her by three years or so, seemingly living by himself at 'Willow Farm'. He died as a result of a tragic accident there in 1927:

Mr Coroner Gale held an inquest on Wednesday 3rd instant at the residence of Mr George Rochford, 'Glenall', Jeir to ascertain the circumstances under which Jacob Blundell who resided alone at Willow Farm some considerable distance from 'Glenall' came to his death. ['Glenall' was the name of the cottage added to the Forest View property - Ed]. Information of the fatality was only that morning conveyed to the coroner through the police that Blundell had been that morning found dead. The deceased had been found lying face downwards in the drawing in his home. His clothing had been burnt off his body. The clothing, bedding and mattress were reduced to cinders and a wall nearby had caught fire but the fire had gone out without spreading marvelous to say. He had been last seen on 21st July when Mr James Rolfe a near neighbour, saw him on his way from Hall. Mr Rochford stated that, not seeing deceased for about 2 weeks he had gone to his residence and found the front door bolted. He forced his way in and found the body of Blundell on the floor. Constable Fyfe of Ginninderra gave evidence also. The Coroner found in accordance with the medical evidence of Dr Blackall that deceased had died from shock aided by suffocation from smoke. Death appeared to have taken place some days previously. He was 74 years old. His wife predeceased him about 4 years ago...and 10 of their 12 children. [Queanbeyan Age 4.8.1927]

"Lying face downwards between the bedroom and the living room at 'Willow Farm' near Jeir with clothing burned from his body, was found the remains of Jacob Blundell, the owner, on Wednesday morning. Close by was the bed on which he had lain. The clothing, bedding and mattress were reduced to cinders, the flooring and nearby wall had ignited but the fire had died out without spreading.

The discovery was made by the Ginninderra Police and they at once informed the District Coroner Mr John Gale who that afternoon held an inquest at the residence of Mr George Rochford of 'Glenall'. The last that was seen of the deceased was on July 21, when Mr James Rolfe, a near neighbour saw him on his way from Hall whether he had gone for his own and a neighbour's mail. He was then in customary good health and quite sober. He had never been seen the worse for liquors.

Mr George Rochford said that not seeing deceased for over two weeks he went to his residence at about 9.30 that morning to see where he was or if anything was the matter. He found the front door bolted on the inside and no one about outside. With the aid of his pocket knife he worked out the bolt of the door and entered. There he found the body of Blundell lying on the floor of his bedroom, also there had been a fire which had consumed the bed and everything on it. The body on the floor was likewise partly burnt and the fire had slightly charred a wall and the floor near where the body lay. Deceased had lived alone. [Ed – his wife Lucy had died three years earlier]

Leaving things as they were at the dead man's place witness returned to his home and there informed Constable Fyfe of Ginninderra by phone of what he had discovered. Constable Fyfe informed the District Coroner of the occurrence then proceeded to deceased's place. The Coroner held an inquest and returned a verdict in accordance with Dr Blackall's opinion that deceased had died from shock aided by suffocation from smoke. [Canberra Times, 5 August 1927]

Jacob was buried at Hall cemetery.

[Allan Hawke's detailed and entertaining study of the patriarch and matriarch of the Blundells in the Canberra district and beyond can be purchased from the author for $30 by emailing : ]