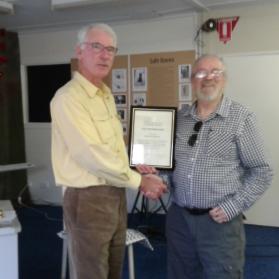 Phil Robson, Honorary Curator for the past five or six years, stood down at the Centre's annual meeting on 10th August. Fortunately, Phil is to carry on as a volunteer worker. His distinguished service to the Centre was acknowledged by Allen Mawer after Phil was awarded Life Membership : "In recognition of the outstanding contribution Phil has made as the inaugural Honorary Curator. Through his leadership, devotion and diligence the Museum has become a successful, highly regarded and valued Centre. For this we thank him". Tony Morris also thanked Phil for all that he has done for the Centre in presenting him with a photographic memento of his time as Honorary Curator.

Alastair Crombie was endorsed as the new Honorary Curator, and immediately requested the gathering to endorse appointment of two deputies - Mardie Troth and Judy Roberts - underlining the fact that it will take three people to fill the hole left by Phil moving on! This proposition was supported by acclamation.

Earlier, the meeting was addressed by Gary Shipp, the Aboriginal Community representative on the ACT heritage Council, who spoke of the importance of traditional knowledge in promoting inter-cultural understanding between aboriginal and non-aboriginal peoples. Gary was presented with a fine timber chopping board produced by our good friends at the Mens Shed.