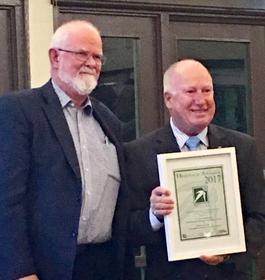 A special exhibition at the Hall School Museum and Heritage Centre has been recognised in the 2017 Heritage Awards of the National Trust of Australia (ACT). The Centre's display of aboriginal stone artefacts drawn from the Gillespie Collection – 'Stones that speak' - was recognised as a valued contribution to the 'conservation of indigenous heritage values' at a ceremony on 28th September presided over by Heritage Minister Mick Gentlemen. Curator of the display Ken Heffernan was presented with a certificate by the Minister.

It is just over two and a half years since Lyall Gillespie's son Neil asked the Hall Centre if we would take care of Lyall's extraordinary collection of research papers, diaries, photographs, books and reports, artefacts and artworks. Ken, whose PhD is in archaeology, coordinates the accessioning of this large and diverse collection. Together with a small group of student assistants from the University of Canberra (Eleanor Wilkinson, Nicola Donnelly, and Hamid Bin Saad) he has been focussing on Lyall's large collection of local aboriginal artefacts – some 7,000 items, nearly all stone pieces. The majority of items, including those in the display, were found on Lyall's mother's property 'Reidsdale', just across the northern ACT border.

Stones That Speak, is the first public showing from the Gillespie collection. It is an expertly curated display of stone tools providing an insight into the lives and skills of Canberra's earliest inhabitants. Curation of the display was done in close cooperation with local indigenous groups. Descendants of the southern tablelands aboriginal peoples who manufactured items in the Gillespie Collection still live in the region. Some of them have visited the museum to help respectfully curate the collection and make it available to teach future generations.