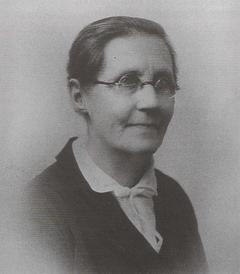 Millicent Sophia Ward was born in Ginninderra in 1858. Her father, Edmund Ward, worked as the gardener for William Davis (junior). Her mother was Margaret Ward (nee Collins). The Wards had established the family's Nine Elms property at Ginninderra.

In 1881 Millicent married George Harcourt who was Davis' bookkeeper and the Ginninderra storekeeper. They had three children together (Ethel, George and Dudley). In 1893 she and George built Deasland homestead. Tragically, George died in Christmas of that year.

Millicent was a strong and capable woman, who continued to run Deasland and its 685 acres of pastureland until the property was resumed in 1913 for the new Federal Capital Territory. This was a development, which Millicent and her children struggled in vain to resist. When they lost, the family packed up and left the district.

Millicent Harcourt died in Canberra in 1942. In her obituary she is described as possessing 'a cheery, kindly and unselfish disposition and was beloved and revered by those who knew her intimately'.