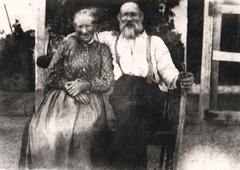 Katherine ('Kate') Gribble, nee Warren, was born at Ballykinlalee, near the Shannon River in North Tipperary, Ireland in 1831. She followed her sister, Peggy, in travelling to NSW. She arrived in January 1860 and worked as a domestic servant at Rouse Hill near Sydney. The Warren sisters' decision to migrate was connected to the miserable conditions in Ireland, particularly following the Irish potato famine of 1845-49. We are even fortunate enough to have Kate's own account, as recorded by her neighbour, Samuel Shumack.

"Conditions in Ireland at the time were very bad and although Peggy was engaged to Mick Ryan, the prospects of marriage were not bright. However, Mick assisted us with our passage money and promised that he would follow as soon as possible. We both obtained employment on landing in Sydney."

In Australia, she met teamster, Tom Gribble. They were wed by October and had relocated to Ginninderra by the end of the year. Tom and Kate built the homestead that was to become known as 'The Valley'. They farmed and raised a family of seven children together.

Tom's parents were shocked to hear he had married an Irish girl. His father recalled: 'My son Tom had left England about two years when we received a letter stating that he had married an Irish girl. When his mother read this letter she broke down and cried, "Oh Lord, what have we done that our son should disgrace his family and marry an Irish savage." I got the surprise of my life when we arrived here and found Tom's wife Kate was equal to any of my daughters.'

Kate is also recorded in Shumack's autobiography as warning him not to go with a neighbour, Charles White, to a local race meeting, as White was known to be a little too fond of drinking. Shumack said, 'Mrs Gribble advised me not to go because Charlie would go on the spree and would lose a week or more from work. I then told Charlie that I was not going and advised him to do likewise, and to this he agreed.' Shumack goes on to relate how White changed his mind, drank too much, and drowned on the way home.

Tom and Kate retired in 1912. They sold their livestock, leased out their property and moved to Yass. She died in 1920 from acute artero-colitis and is buried in Yass cemetery.