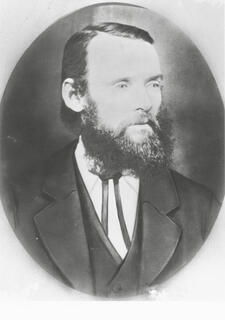 A third son is thought to have also emigrated – possibly Joseph. Lyall Gillespie recorded that there were rumours he met a violent death, either in a fire or killed by aborigines, but no details are known

Hugh arrived on the 'Golconda' in 1857, described as "a labourer, 18, from Tintinhull, Somerset, could not read or write". Samuel Shumack wrote : "Hugh came to Canberra around 1856 and worked for Joseph Shumack, who was later the licensee of the Canberra Inn". Shumack describes Hugh Read as a 'rough diamond [who] at times would be carried beyond reason by an ungovernable temper' (p.58)

Hugh and his brother George purchased land near Spring Flat, Tallagandra in 1859, at a land sale in Queanbeyan: George – portion 10 (Lot 24) of 81 acres, and Hugh – portion 11 (Lot 25) of 40 acres 2 Roods. The land was described as : "..... well suited for agricultural purposes. There is very little surface water, but it may be obtained by sinking. They are open forests, timbered chiefly with gum, apple and box. The rocks are schist and quartz." Hugh erected a dwelling and lived on this land for several years. He later left it in trust for his daughter, Ethel Walmsley, and it was known as 'Tintinhull', after their English village.

According to Lea-Scarlett Hugh and Eliza 'settled about a mile from his brother along the Sutton-Tallagandra Road near where Back Creek crosses the road'. Hugh progressively acquired more land and he established his lifelong home, 'Wattle Grove'. Not far from 'Wattle Grove', between Back Creek and its tributary Spring Flat Creek, in 1859 brother George had purchased three small blocks of land, totalling 181 acres, which formed the foundations of his 'Spring Flat' estate.

Hugh engaged in farming and grazing pursuits and appears to have been very successful. At some point he also purchased 500 acres at Naas from Thomas Gregory.

Hugh and Eliza had ten children:

Hugh Read died on September 2 1894 at 'Wattle Grove', Sutton aged 56 years.
Eliza died in1907 and was buried beside Hugh, and also with son John (husband of Ellen Maloney) and daughter Margaret (wife of Richard) Maloney.