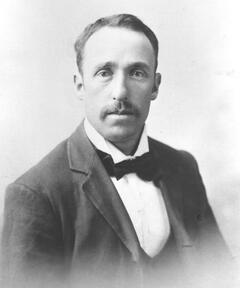 George Read (1828-1907 Gundaroo) arrived on the "Emma Eugenia" on 9 June 1849 and went to the Gundaroo district where he was employed by James Hughes of 'Mugwell'. George had three cousins – Henry, John and Elizabeth – living in Sydney.

George was the great-grandfather of Lyall Gillespie.

Mary was the daughter of John Casey and Caroline (nee Purcell) who married on 4 February, 1833 at their home 'Gondoloo'. John was the son of Mark and Ellen (nee Maher) Casey. They had been transported to Australia for minor offences in 1826 on the "Sir Godfrey Webster" and 1829 on the "Sovereign".

Described as : " These portions are well suited for agricultural purposes. There is very little surface water: but it may be obtained by sinking. They are open forests, timbered chiefly with gum, apple and box. The rocks are schist and quartz."

George expanded his property, which was named 'Perm's Hill' and ran sheep, some cattle and cultivated some land.

George and Mary had eleven children.