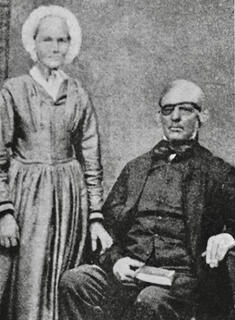 Thomas Brown was born at Burwash, Sussex UK in 1806. In 1831 he married Sarah Benn Turk, from Buxted in the same county, and in 1837 the couple emigrated to Australia as assisted migrants, arriving at Sydney on April 1838 with their first three children. The shipping indent for the 'Duchess of Northumberland' records : Brown, Thomas aged 31, farm servant born Sussex; Brown, Sarah 25 (also recorded as 26) farm servant and dairy woman born Sussex. Stephen son aged 5 (also recorded as 6), Harriet daughter aged 4, and James son aged 2 - all born in Sussex. Tom's brother William arrived on the same ship, as did John Wheatley, the man responsible for converting Thomas, who was destined to become a prominent preacher and evangelist. They all settled at 'The Cowpastures' near Cobbity for some years, during which three more children were born to Thomas and Sarah – Sophia, Sarah and Thomas.

They subsequently moved to Jerrawa Creek, about 40 miles west of Goulburn, and it was in this district, at Dalton (originally known as 'Wesley Vale'), that they lived and died – Thomas in 1871 aged 64, and Sarah in 1902 at Dog Rock Farm, Dalton NSW‎, aged 90 years. Eight more children were born, the last of them, Job Brown, in 1859. Thomas' life in Australia was dedicated to spreading the word of the Lord.

He and Sarah's life has many parallels with that of Thomas and Eliza Southwell, who also arrived in Australia, from Sussex, in 1838 (on the 'Lady Nugent', six months after the Browns) and first settled at Cobbity. Later moving to establish their 'Parkwood' home and property, Thomas' life thereafter was devoted to preaching and evangelism across the broad districts of Wallaroo, Weetangera and Ginninderra. Both Thomases saw that churches for their congregations were built. Both also had large families – the Thomas Southwell fathered eighteen children and the Browns fourteen. Unsurprisingly it was not long before descendants of these two pioneering Methodist families began to inter-marry, with the result that Brown family members were soon found throughout the Ginniderra district, notably in the 'Southwell and Brown' partnership that purchased and conducted the Hall General Store for some thirty years from around 1900 to 1934. Of the children of Thomas and Sarah's eldest son Stephen no fewer than five of them married a Southwell. In 1939 the descendants of Thomas and Sarah were estimated to number around a thousand.

'Since the earliest days of settlement in this district, the names of Brown and Southwell have been closely linked with rural progress. In January of last year the descendants of Thomas Southwell, of 'Parkwood', celebrated the centenary of the arrival of the family in Australia.
Dalton, on Sunday and Monday last, was the scene of another interesting reunion, when descendants and friends of the Brown family gathered to pay tribute to the memory of Thomas Brown, who, with his family, arrived in Australia on April 26, 1838, and shortly afterwards travelled inland to found a new home in the 'wilderness.'

Thomas Brown was born in Sussex, England, on August 3, 1806, and his life in England is little known except that he was educated in the hard school of experience. He arrived in Sydney on the sailing ship 'Duchess of Northumberland', on April 26, 1838, and with his wife and family resided at 'The Cowpastures', near Cobbity, where a number of other English families had established themselves.

However, the urge to break new ground was strong in Thomas and Sarah Brown, and soon the family was trekking inland to settle finally at Oolong Creek, Dalton. Here Thomas Brown, like his friend, Thomas Southwell, of Parkwood, soon became known as a preacher and Evangelist, and one of his first acts was to assist in the building of a little church at Wesley Vale. The present Methodist Church at Dalton can also be regarded as a monument to Thomas Brown, as it was mainly due to his efforts that this brick building superseded the earlier structure.

.......When the Brown family arrived at Dalton 100 years ago, an open-air service was held under a tree near the homestead. Many family gatherings have been held since at 'Tom Brown's Tree'. On Sunday there was a pilgrimage from the Church to the old tree, and under its shade a devotional service was conducted by Rev. Bernard Deane. The final rally was held in the Church grounds on Monday afternoon, an address being delivered by Rev. L. A. R. Taylor.

At all services, reference was made to the sterling character of the late Thomas Brown, whose work for the Methodist Church will long be remembered in the district. For nearly 20 years he regularly preached at such districts as Gunning, Yass, Braidwood, Queanbeyan, and centres now embodied in the Australian Capital Territory.

The descendants of Thomas and Sarah Brown number over 1,000, many of whom are well-known in this district'.

'Tom Brown was born in Sussex (England) in the year 1806. Though Protestant, his parents were not Methodists. His earliest religious impressions were received under the preaching of Mr. John Wheatley. His mother once said to. him: "I believe you will be a Ranter, Tom." To which he replied: "You will find out that the Ranters are right, mother, and we are all wrong." It was at revival services conducted in the Duddleswell Chapel that he was convicted of sin. Returning home, he told his wife of the vow he had made to serve God. Hearing the good news, she jumped out of bed and fell upon her knees to express her gratitude to God.

Brown felt that God had granted his request for a good wife; and not a little of his eminent success in after life must be traced to the patient, consecrated woman who remained at home while he was on his Master's service. His last word to her when setting out to preach would be, "Wife, lift up for me." Brown had no educational advantages in his youth, a loss keenly felt in after years. His employment was that of a gamekeeper. In the year 1838 he emigrated to New South Wales with his wife and family — two boys and a girl. He found his way to Luddenham, where he worked for six months, afterwards removing to Marsden's old place at the Cowpastures. He moved again, finally making his home at Bringelly, where he succeeded, with others already named, in building the chapel at Stoney Range.

Bad seasons forced him to remove to the Gunning district in the year 1848. While at Bringelly the stress of poverty was so keenly felt that he was driven to earnest prayer about his rent, then falling due. Hearing of his difficulty, his land lord said: "I'll let Brown see I'm not going to take prayers for my rent." But God came to his help, and he was able to pay the sceptical landlord, and at the same time to give notice of removal. The spot selected by Brown for his new home was on the Jerriwa Creek, about eight miles from Gunning, notorious then as the abode of cattle stealers. Drunkenness was rife, and property insecure. Impressed with the beautiful scenery on the banks of the creek and the fertility of the soil, the Rev. James Watkin, when on a visit to this district, named the place Wesley Vale. It is now known as Dalton.

Here Tom Brown built his solitary hut, soon to be surrounded by many neighbours. Though religion was "dead as a doornail," to use his own expression, he preached on his first Sunday in Mr. Perrin's house five or six miles away. This was soon followed by other preaching places and prayer meetings, to which he walked, until better times made a horse and gig possible. He twice walked from Gunning to Goulburn to attend the Quarterly Meeting, at which the Rev. W. Lightbody, the first minister, presided. Jerriwa then formed part of the Goulburn and Braidwood Circuit, which extended from Mittagong to Gunning, and included Araluen and Bombala. Tom Brown thus became associated with the pioneers of Methodism throughout that extensive district. He preached at, Gunning, Stoney Hole, Wesley Vale, Mundoonan, and Berebangelo; and found among his fellow-labourers Matthew Trenery, John Simpson, Robert Blatchford, Henry Goldsmith, John Wheatley, John Bell, John Gale, Henry Saxby and Timothy Starr......................

Tom Brown was no ordinary man. Tall and sparse with remarkable strength, he was a diamond in the rough. But he certainly was a diamond, which the refining influences of the Holy Spirit cut and polished till it shone with the beauty of holiness. He was truly man of God, with a rich experience of Divine things, "He was wont to say," writes the Rev. H. W. T. Pincombe, "in his youth he was not brought up, but dragged up. Nature endowed him with many of her richest gifts of mind and heart, and under the refining influence of Divine grace, he became in his latter years one of the noblest and most lovable of men.'! As a preacher and platform speaker he was favourably known throughout his extensive circuit, and his services were always acceptable. He first commenced to preach in the Camden district, being put on the plan by the Rev. John MeKenny. He begun with some reluctance, being in doubt as to his fitness for such work. He thus besought God to give him five souls, which he would take as proof of his call. The five were given, and many more, and all doubt was removed. He dated his chief success as a soul-winner from his association with California Taylor, and the Rev. John Watsford, who conducted revival services at Dalton, and induced him to go to Goulburn to help in similar services there. Thus he learnt many lessons in spiritual work, and he greatly profited by the visit of California Taylor............

He did not write his sermons, but, selecting his text, he thought on it till the Holy Ghost illuminated it, and when his heart was hot within, he spake. One sermon he was particularly successful with was Ezekiel's vision in the valley of dry bones. Ezek., chap. 37.) His usual theme was man's need of salvation and the grace and power of Christ as a Saviour. His most effective method of attack was to pour pity on the unsaved until they felt to mean and miserable of or anything but to cry to God for mercy, and then would follow the most positive as-surances that all who came to Jesus in submission and trust would be instantly saved. "Give yourself to Jesus and put your trust in His grace and power," he would say, "and my soul for yours, if He does not save you." His great desire was to get hold of the people; and to do this he would cease preaching and go to prayer if he though it desirable'.