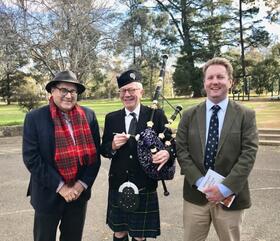 On a brisk Saturday afternoon some sixty guests attended the launch of 'Highlands to the Limestone Plains', the story of the leaving of the Highlands by Donald and Ann Cameron in 1838 and the life that followed on the Limestone Plains. Author Cameron Archer, great grandson of one of Donald and Ann's thirteen children, has had a long and successful career in agricultural education, and writes with authority and obvious enthusiasm on the role of wool, sheep and shepherding in the emptying of the Highlands and the settling of NSW, as well as putting flesh on Donald and Ann, and their large family. His wife Jean read selected extracts from the book.

The book was launched by his friend and colleague Keith Amos, another historian, who was the young Cameron's teacher at The Mullion school on Mountain Creek Road in the 1960's. Before Keith the Commissioner for Clan Cameron Australia, James Lachlan Cameron, spoke of the historical context of the Highlander migration of 1837-1840, and praised the new book as a fine contribution to the Cameron family story.

Before the proceedings got underway the visitors had time to view some of the Centre's displays, while a piper gave the atmosphere a Celtic flavour. Centre volunteers served refreshments when the talking was done, and most of the gathering seemed to be going away with a copy (or more) of the book. Copies will be available for sale at the Centre at a price of $15.