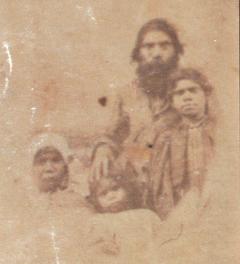 Bobby Hamilton was a renowned Indigenous man and a talented drover and cricketer. He was a Ngunnawal speaker and married Nellie Hamilton (later known as Queen Nellie). He became a leader of the local Indigenous community until his death in 1872.

His misidentification with Bobby Deumonga, a much older Indigenous man from Braidwood, persists.

There are different accounts put forward to explain Bobby's use of Hamilton as a surname. It has been reported that he was known as Bobby Hamilton amongst the Europeans, as his wife, Nellie, had adopted that surname from Hamilton Hume with whom she had had her first child. Alternatively, it has been argued that he was the son of a 'Gurmal' (i.e. Walgalu) man named Hamilton (c. 1804-1854), who was a friend and guide of Terence Murray of Yarralumla and a relative of Noolup. If this is the case, Bobby's mother may have been a Kamberri woman.

Whatever the case, Bobby Hamilton first comes to fame in Ginninderra as an expert horse-breaker and one of the more talented members of William Davis' Ginninderra cricket team, which included at least two other Indigenous players, who represented the village regularly in matches from the late 1850s. Bobby was a champion fieldsman and wicket keeper. His good friend, Johnny Taylor became a star batsman. But some of the other teams in the district were intolerant of playing against Indigenous players. In 1861 members of the Duntroon team walked off the field in protest. But this prejudice seems to have been relatively isolated, as Hamilton was, more often than not, applauded at gatherings and at cricket functions throughout the district.

It is reported that in 1863 Bobby Hamilton and Jimmy Taylor were recruited as 'black trackers' when the Boro Mail was held up by bushrangers. The police party was unsuccessful and Captain Battye, who led the unsuccessful expedition, tried to shift the blame for the escape of the felons onto the trackers.

In 1867 Bobby Hamilton helped save the Ginninderra Blacksmith's Workshop from destruction by fire. The smith's family, the McAuliffes, lost their house, outbuildings and all their possessions, but Hamilton's assistance saved the smithy itself. Hamilton had been working for Flourence McAuliffe in the blacksmith's shop and around the small farm at the time.

In 1872, Hamilton was afflicted with tuberculosis and/or consumption and died in Queanbeyan hospital.