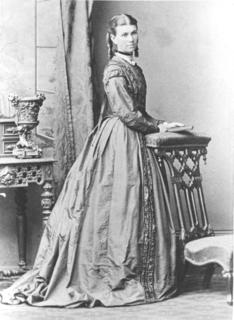 Minna Close Davis was one of the well know Palmer family, who had landholdings across NSW and Victoria. Her parents were George Thomas Palmer (junior) and Selina Augusta Palmer (nee Rowes). She was born near Newcastle in July 1843.

By 1845 her parents had relocated to Ginninderra where they took over the management of the Palmerville estate. Minna spent her schooling in Sydney. It is reported that her school friends were amused by her swimming style, which she explained to them as being taught to her by her Indigenous friends at Ginninderra.

At the wedding Minna was presented with a Ngunnawal necklace (photograph below) by Jimmy the Rover.

Minna and Frederick had three daughters (Ada, Lucy, and Mabel).

From the mid-1870s Frederick and Minna lived at 'Woodhouselee' about 20 km north of Goulburn. Frederick had taken up the position as postmaster there in 1876. They also purchased the well established Pigeon House Inn and ran this hotel for a number of years.